Item 73 - Dunsmuir children with their mother, Laura Dunsmuir, at Burleith 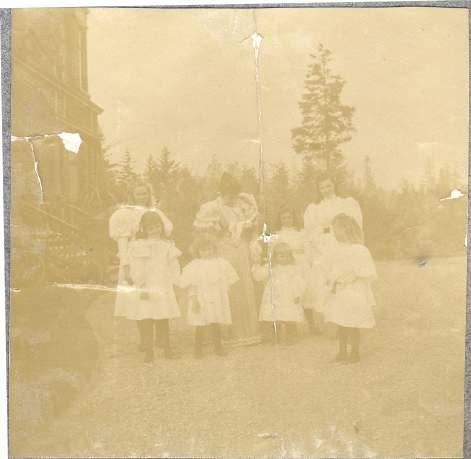 Dunsmuir children with their mother, Laura Dunsmuir, at Burleith

digital representation only; original is damaged

L to R: Maye, Marion, Kathleen, Laura, James, Elinor, Bessie, Muriel.
James Jr., known as Boy by his immediate family, and born in January 1894, is dressed the same as his sisters. In the 19th century, boys and girls were dressed alike until aged about 4. At this time, boys would have a 'breeching ceremony' where their hair would be cut short and they would wear their first pair of trousers. Although less common by the end of the 1800s, the Dunsmuir family followed this tradition.