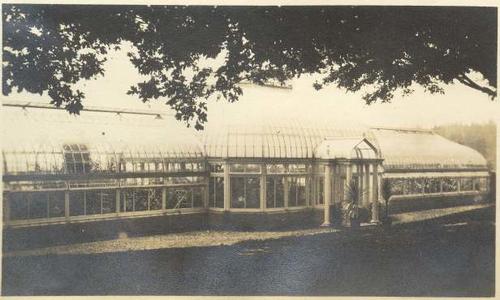 The walled garden and tennis courts were added as part of extensive development of the estate by Boston based landscape architects, Brett and Hall from 1912-1914. The walled garden contained vegetable and fruit crops as well as the greenhouse complex. The greenhouse and conservatory had a full time manager and required 60 tons of coal and 200 cords of wood per year to heat. The ornate conservatory pictured had a central dome of about 30 ft square, with two side galleries, each 60 ft long. Flowers were grown inside that were intended for display in the castle and in later years it was also used for food production. According to a former gardener, interviewed in the 1950s, Laura Dunsmuir said that the conservatory was an extravagance in a private garden and that it should be in a public park.

Images are provided for personal research only; other uses require permission. Contact the archivist for more information: rruarchives@royalroads.ca