Pièce 53 - Conservatory and header house from south. Vegetables are planted in front 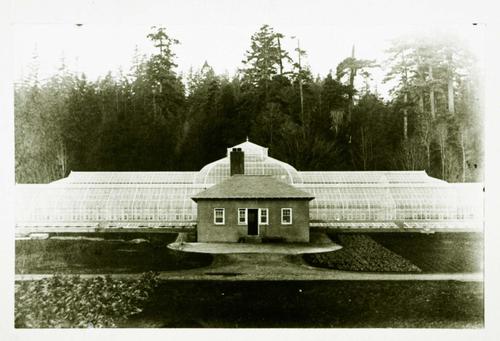 Conservatory and header house from south. Vegetables are planted in front

The header house for the greenhouse complex provided an indoor workspace without taking away from the growing space. The boilers used to heat the greenhouses were kept in the basement of this building.
The greenhouse and conservatory were constructed and installed by the Lord and Burnham Company. The glass house complex had a full time manager and required 60 tons of coal and 200 cords of wood per year to heat. The ornate conservatory had a central dome of about 30 ft square, with two side galleries, each 60 ft long. Flowers were grown inside that were intended for display in the castle and in later years it was also used for food production.
This image shows how the grounds around the greenhouse within the walled garden were also used as a kitchen garden, likely growing such vegetables as cabbages, cauliflower and brussells sprouts.