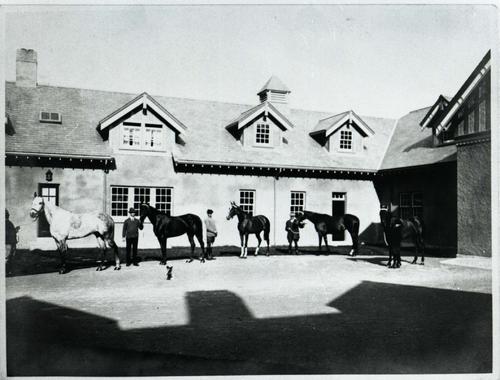 Stables courtyard with 5 horses on display

James Dunsmuir Jr is just out of shot on left side, holding Kismet's reins. Mann family members hold the other horses. Coachman, Fred Mann is with 4th horse from left.

Coachman, William Edward John (‘Fred’) Mann, was in charge of the stables at Hatley Park. Also employed were his sons, Charlie, Bill and Jack. His youngest son, Harry, also helped out in the stables when not attending school. They are standing in the courtyard of the U-shaped stables and garage building. The coachman's home was attached to the stables at the east side of the building and the chauffeur’s home was attached to the garages on the west side. The building was added as part of the extensive estate development by Brett and Hall, 1912-1914.