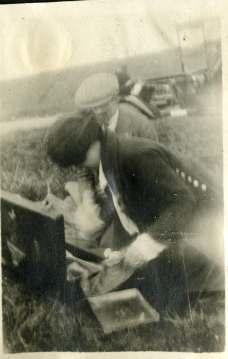 A man and Dola at a roadside picnic

In the early 1920s, Dunsmuir sisters, Dola and Muriel, and Muriel’s husband, Edward Molyneux, took time to tour the ruins of Europe in the aftermath of the war. Edward Molyneux was an ideal tour guide for the sisters, having served in 1915 with the Duke of Wellington Regiment on the Western Front. Although he was promoted to Captain for his actions in battle, injury resulted in the loss of sight in his left eye and withdrawal from active duty.